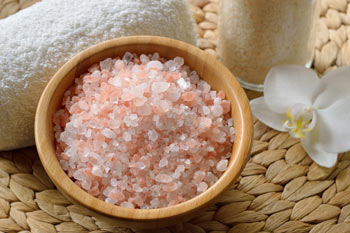 You may have heard of a type of salt called Himalayan pink salt that has become popular in health and fitness circles. But is pink salt better than white or any other color of salt? Is it even better than sea salt?

Salt Is Essential for Body Function

Our bodies require some salt intake in order to work properly. It's a big component of many fluids in the body, including blood, helps other nutrients enter and leave cells, aids in blood pressure regulation, and more. However, most health organizations recommend limiting the amount of sodium that you take in, feeling that too much can increase the workload on the heart and result in high blood pressure. Not all scientists agree with this conclusion, and research results have been a bit mixed.

What Is Himalayan Pink Salt?

This special type of salt, known for its large kernels and red, pink, and white coloring, is hand-mined in the Himalayan Mountains in Asia. Millions of years ago, sea salt beds in that area were covered in lava and preserved. Later, they were covered in ice and snow, further preserving the salt and protecting it from pollution. Because of this isolation, many people believe that there are no purer salt beds on Earth.

Table salt is comprised of about 98% sodium chloride. The rest of its composition is added man-made absorbents (to keep the salt from caking up) and iodine. In some non-US countries, salt also has fluoride added to it. In fact, table salt is highly processed, bleached, and treated.

Himalayan salt and other natural, unrefined types of salt are only about 84% or so comprised of sodium chloride. The rest is other minerals, mostly in trace amounts. Some people feel that Himalayan pink salt is healthier than table salt because of its lack of anticaking agents, lower sodium level, and higher mineral content. Also, Himalayan pink salt kernels are larger, so people generally take in less overall sodium when they use it in place of table salt.

Sea salt has also been popular in recent years, and while it's less refined than table salt, it is becoming more highly-processed, and some are concerned with the pollution levels in the ocean affecting its purity, as well.

Among those who feel that Himalayan pink salt is healthier than table salt, these are some of the benefits they attribute to it:

Should I Switch to Himalayan Pink Salt?

It's only fair to say that there are many experts who do not feel that there are any particular benefits of Himalayan pink salt over table salt or sea salt. They argue the following:

Therefore, the jury is still out on whether Himalayan pink salt is really any better for people than table salt. However, here is something to keep in mind if you are considering a switch: if your diet is high in processed or restaurant foods, you will still be getting a high dose of table salt.

Can You Lose Weight by Eating Spicy Food?

Can You Shrink Your Stomach?

Glucomannan: A Different Source of Fiber

The Benefits of Bone Broth